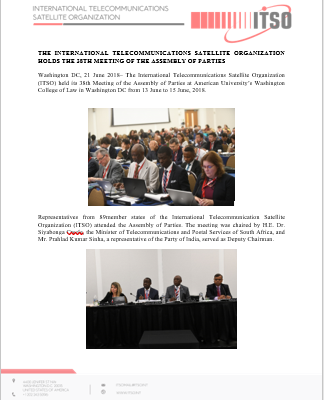 The International Telecommunications Satellite Organization (ITSO) held its 38th Meeting of the Assembly of Parties at American University’s Washington College of Law in Washington DC from 13 June to 15 June, 2018.

Representatives from 89 member states of the International Telecommunication Satellite Organization (ITSO) attended the Assembly of Parties. The meeting was chaired by H.E. Dr. Siyabonga Cwele, the Minister of Telecommunications and Postal Services of South Africa, and Mr. Prahlad Kumar Sinha, a representative of the Party of India, served as Deputy Chairman.

The Assembly took important decisions on a number of key issues such as the approval of ITSO’s Strategic Plan for the period 2018 to 2020, Intelsat’s adherence to the Core Principles and the ITSO budget for the two fiscal years ending 30 June 2019 and 2020. In preparation for the next ordinary Assembly of Parties in 2020, the Assembly decided to approve a workplan and the associated studies to provide the 2020 ordinary meeting of the Assembly of Parties with the information necessary to decide on the future of the ITSO Agreement.

The Assembly also approved an implementation process for the amended Article XII (c) (ii) of the ITSO Agreement. In addition, the Assembly of Parties decided to select as the members of the Panel of Legal Experts 11 individuals from the following countries: Argentina, Cameroon, Cote d’Ivoire, Germany, Japan, Madagascar, Namibia, Poland, Uganda, United Kingdom, United States. Our warm congratulations to the newly formed Panel of Legal Experts.

The Assembly also expressed its appreciation to the Director General for the work done in the context of Capacity Building. The next ordinary meeting of the Assembly of Parties shall take place in 2020.