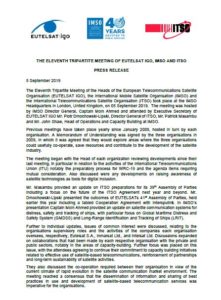 The meeting began with the Head of each organization reviewing developments since their last meeting, in particular in relation to the activities of the International Telecommunications Union (ITU) notably the preparatory process for WRC-19 and the agenda items requiring mutual consideration. Also discussed were any developments on raising awareness of satellite technologies as tools for digital inclusion.

Mr. Masambu provided an update on ITSO preparations for its 39th Assembly of Parties including a focus on the future of the ITSO Agreement next year and beyond. Mr. Dmochowski-Lipski presented the outcomes of EUTELSATs 41st Assembly of Parties, held earlier this year including a tabled Cooperation Agreement with Intersputnik. In IMSO’s presentation Captain Moin Ahmed provided an update on satellite communication systems for distress, safety and tracking of ships, with particular focus on Global Maritime Distress and Safety System (GMDSS) and Long-Range Identification and Tracking of Ships (LRIT).

Further to individual updates, issues of common interest were discussed, relating to the organisations supervisory roles and the activities of the companies each organisation oversees, respectively, Eutelsat S.A., Inmarsat Ltd., and Intelsat Ltd. Discussions expanded on collaborations that had been made by each respective organisation with the private and public sectors, notably in the areas of capacity-building. Further focus was placed on this issue, with the attendees agreeing to continue their commitment to capacity building initiatives related to effective use of satellite based telecommunications, reinforcement of partnerships and long term sustainability of satellite activities.

They also discussed the co-operation required between their organisation in view of the current climate of rapid evolution in the satellite communication market environment. The meeting reached a consensus that the dissemination of information and sharing of best practices in use and development of satellite-based telecommunication services was imperative for the organisations.

At the conclusion of their discussions, the Heads of the three organisations signed a Joint Declaration to emphasise the importance of, inter alia, effective spectrum management and reliable service maintenance in nurturing the role of satellite technologies in safety, security and disaster management, sustainable development and bridging the digital divide.

In addition, satellite service providers Iridium and Inmarsat each shared a presentation with the Heads of the organisations.

The next tripartite meeting will take place in Washington DC, United States of America at the invitation of ITSO, date to be confirmed at a later date.

The European Telecommunications Satellites Organization (EUTELSAT IGO) is an intergovernmental organisation established by an International Treaty. Since 2001 EUTELSAT IGO was transformed and all its operational activities, assets and related liabilities were transferred to the company Eutelsat S.A. Comprising 49 Member States its mission is to maintain the rights to use radio frequencies and orbital locations which were assigned collectively to the Member States by the International Telecommunication Union. EUTELSAT IGO oversees the operations of Eutelsat S.A. so as to ensure that the company complies with the Basic Principles enshrined in the EUTELSAT Amended Convention. EUTELSAT IGO plays an active role within the global space and satellite telecommunications community. For more information, visit www.eutelsatigo.int.

IMSO (The International Mobile Satellite Organization) is the intergovernmental organisation which oversees certain public satellite safety and security communication services provided via the Inmarsat satellites and also co-ordinates the Long-Range Identification and Tracking of ships (LRIT).  IMSO is established under the provisions of the Convention on the International Mobile Satellite Organization which also defines the public services, such as satellite services for the Global Maritime Distress Safety System (GMDSS), which is subject to international oversight. Headquartered in London, UK, IMSO currently has 105 Member States. For more information, visit www.imso.org.