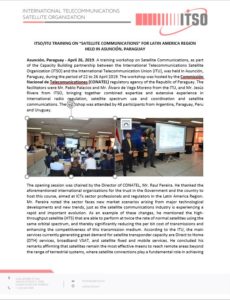 Asunción, Paraguay – April 26, 2019. A training workshop on Satellite Communications, as part of the Capacity Building partnership between the International Telecommunications Satellite Organization (ITSO) and the International Telecommunication Union (ITU), was held in Asunción, Paraguay, during the period of 22 to 26 April 2019. The workshop was hosted by the Commissión Nacional de Telecomunicationes (CONATEL) regulatory agency of the Republic of Paraguay. The facilitators were Mr. Pablo Palacios and Mr. Álvaro de Vega Moreno from the ITU, and Mr. Jesús Rivera from ITSO, bringing together combined expertise and extensive experience in international radio regulation, satellite spectrum use and coordination and satellite communications. The workshop was attended by 48 participants from Argentina, Paraguay, Peru and Uruguay.

The opening session was chaired by the Director of CONATEL, Mr. Raul Pereira. He thanked the aforementioned international organizations for the trust in the Government and the country to host this course, aimed at ICTs sector professionals and regulators in the Latin America Region. Mr. Pereira noted the sector faces new market scenarios arising from major technological developments and new trends, just as the satellite communications industry is experiencing a rapid and important evolution. As an example of these changes, he mentioned the high-throughput satellite (HTS) that are able to perform at twice the rate of normal satellites using the same orbital spectrum, and thereby significantly reducing the per bit cost of transmissions and enhancing the competitiveness of this transmission medium. According to the ITU, the main services currently generating great demand for satellite transponder capacity are Direct to Home (DTH) services, broadband VSAT, and satellite fixed and mobile services. He concluded his remarks affirming that satellites remain the most effective means to reach remote areas beyond the range of terrestrial systems, where satellite connections play a fundamental role in achieving an interconnected world, in keeping with the National Government’s policies relating to telecommunications.

The topics of the workshop included:

ITSO (International Telecommunications Satellite Organization) is an intergovernmental organization with the mission to ensure that Intelsat S.A. provides public telecommunications services, including voice, data and video, on a global and non-discriminatory basis. Headquartered in Washington, DC., ITSO currently has 149 member countries. For more information, visit www.itso.int