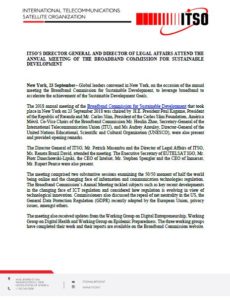 The 2018 annual meeting of the Broadband Commission for Sustainable Development that took place in New York on 23 September 2018 was chaired by  H.E. President Paul Kagame, President of the Republic of Rwanda and Mr. Carlos Slim, President of the Carlos Slim Foundation, América Móvil. Co-Vice Chairs of the Broadband Commission Mr. Houlin Zhao, Secretary-General of the International Telecommunication Union (ITU), and Ms Audrey Azoulay, Director-General of the United Nations Educational, Scientific and Cultural Organization (UNESCO), were also present and provided opening remarks.

The Director General of ITSO, Mr. Patrick Masambu and the Director of Legal Affairs of ITSO, Ms. Renata Brazil David, attended the meeting. The Executive Secretary of EUTELSAT IGO, Mr. Piotr Dmochowski-Lipski, the CEO of Intelsat, Mr. Stephen Spengler and the CEO of Inmarsat, Mr. Rupert Pearce were also present.

The meeting comprised two substantive sessions examining the 50/50 moment of half the world being online and the changing face of information and communication technologies regulation. The Broadband Commission’s Annual Meeting tackled subjects such as key recent developments in the changing face of ICT regulation and considered how regulation is evolving in view of technological innovation. Commissioners also discussed the repeal of net neutrality in the US, the General Data Protection Regulation (GDPR) recently adopted by the European Union, privacy issues, amongst others.

Prior to this annual meeting, the Commission issued the 2018 edition of its flagship State of Broadband Report on 11 September, a unique global snapshot of broadband network access and affordability, with country-by-country data for over 160 economies worldwide measuring broadband access against key sustainable development targets set by the Commission. The 2018 report shows that more and more governments now benchmark broadband status in their national plans; and for the first time, the report shows that at least 15 countries now have strategies in place for promoting the safe use of artificial intelligence.

About ITSO with 149-member states, that incorporates the principle set forth in Resolution 1721 (XVI) of the General Assembly of the United Nations, which established that communication by means of satellite should be available to the nations of the world as soon as practicable on a global and non-discriminatory basis. Originally established in 1973 as INTELSAT, the International Telecommunications Satellite Organization was restructured in 2001. The restructuring led to the creation of a private entity, Intelsat S.A. and to the continuation of the intergovernmental organization with a new acronym (ITSO). ITSO’s mission is to monitor the performance of Intelsat’s public service obligations and to safeguard the Parties’ Common Heritage. For more information, visit www.itso.int

About the Broadband Commission for Sustainable Development

The Broadband Commission for Sustainable Development was established in 2010 and comprises more than 50 leaders from across a range of government and industry sectors who are committed to actively assisting countries, UN experts and NGO teams to fully leverage the huge potential of information and communication technologies (ICTs) to drive national SDG strategies in key areas like education, healthcare and environmental management. For more information, visit http://www.broadbandcommission.org